Eurostat newsrelase on asylum applications in 2017 and asylum decisions

Today Eurostat published the 2017 statistics on 'Asylum in the EU' on its website. It covers main trends and characteristics of first time applicants and first instance decisions on asylum applications for 2017 in the EU. 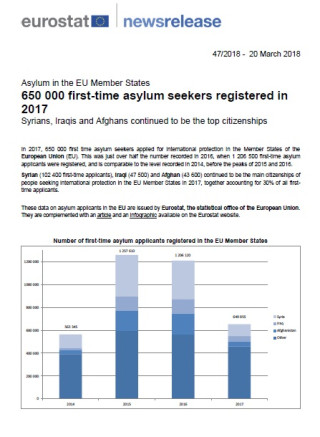 The report is also complemented with an Infographic - a visualisation of the top 3 citizenships of applicants and Member States respectively.

Some key trends in the data:

•   Highest number of first-time applicants relative to the population in Greece, lowest in Slovakia

•    In 2017, nearly 1 million first instance decisions were issued in the EU Member States; among them, 46 % were positive.

Eurostat Newsrelease Asylum in the EU 2017