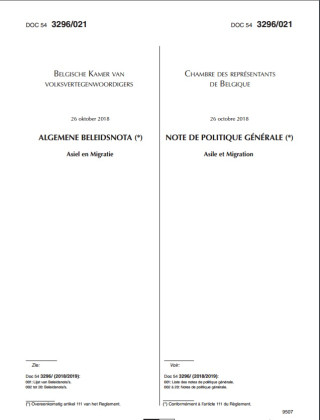 The last parliamentary year, the emphasis is firmly on combating the phenomenon of illegal transmigration, on the further expansion of return capacity and on the reduction of secondary asylum flows.

As far as the fight against the phenomenon of illegal transitmigration is concerned, the State Secretary for Asylum and Migration refers to the 10-point action plan that was developed in collaboration with Minister Jambon.

In the area of ​​legal migration, great importance is given to the investment in the education of third-country nationals and the economic benefits that Belgium can obtain from it. By the end of the legislature, the possibility of an extended stay of this target group would be included in the Immigration Act. For example, it should be possible for third-country nationals to reside in Belgium for a certain period after completion of a research or study, to enable an entrepreneurship or job search. It is also emphasized that efforts should be made to further unlock and further simplify the labour market for both highly skilled third-country nationals and third-country nationals with technical profiles for ‘bottleneck’ jobs in our country. The State Secretary for Asylum and Migration therefore wants to have all EU directives on labour and academic migration transposed by the end of this legislature.

By the end of 2018, the full text of the Migration Code should be finalized, after which the discussions within the government can start.

Regarding the limitation of the asylum influx, the State Secretary for Asylum and Migration says that this is an absolute policy priority. He also emphasizes that Belgium will always comply with its humanitarian obligations under international and European law. According to him, the limitation can take place in three ways: 1) to provide targeted discouraging information, 2) maximum use of Dublin transfers, 3) to temporarily suspend commitments for legal asylum migration.

The government also hopes to see the EU moving towards a mature and pragmatic external migration policy, with the following characteristics: 1) Drastic improvement of the reception conditions for refugees in the region, 2) Consistent border control in which the Schengen border control is fully complied with, linked to an efficient and effective return policy within a framework of enhanced cooperation with the countries of transit and origin; 3) Resettlement of refugees, in a safe and legal way, from the conflict regions themselves, on the basis of voluntary commitments from the European member states.

The State Secretary for Asylum and Migration concludes with the reception policy. Here, the reduction of the reception facilities is temporarily postponed because of a higher asylum influx.

General Policy Note on Asylum and Migration (Dutch and French)