A tool for better comparability

Migration and asylum policies at EU and national levels have quickly evolved since the first EMN Glossary was published in January 2010. In order to provide reliable and updated information and to adjust to the latest migration and asylum related developments, the EMN Glossary is regularly updated (both in printed version and/or online).

The sixth updated edition of the EMN Glossary - published in May 2018 - contains :

It can be consulted and downloaded here.

Terms are arranged in alphabetical order. For each term, the following information is provided:

See the example below: 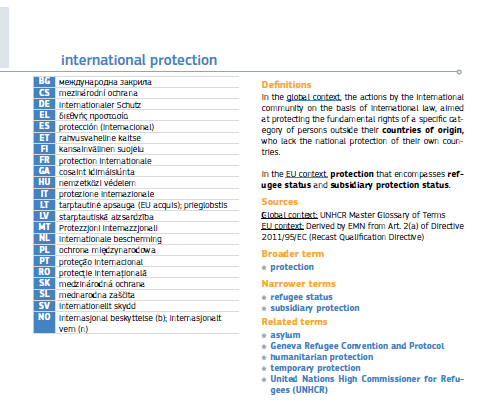 Whilst the EMN Glossary is developed in English, it has been translated into other languages by some Member States. The EMN Glossary version 2.0 (2012), version 3.0 (2014), or version 5.0 (2016) is available in Finnish, French, Italian, Lithuanian, Portuguese, Spanish and Arabic.