Since the first publication of the European Migration Network (EMN) Asylum and Migration Glossary in 2010, it has been a valuable resource for practitioners, policy-makers and researchers in the field of migration and asylum. By harmonising EU asylum and migration terms, the EMN Glossary offers an EU-wide multidisciplinary vocabulary of terms and concepts, translated into over 20 languages. The latest version of July 2020 contains approximately 500 terms. 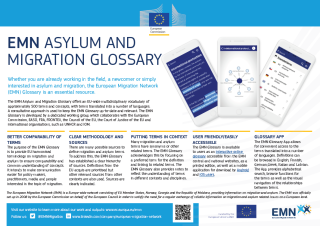 The EMN Glossary is developed by a dedicated working group which collaborates with the European Commission, EASO, FRA, FRONTEX and international organisations, such as UNHCR and IOM. The EMN also cooperates with EU institutions which participate in the EU's terminology database (IATE - Interactive Terminology for Europe), such as the Council of the EU, the Translation Centre for the Bodies of the EU or the Court of Justice of the EU. Each definition in the EMN Glossary has been formulated according to the IATE standard, meaning that they can directly replace the term in any given text. Some of the terms with definitions are also included in the IATE database and are thus available to a wider public.

The purpose of the EMN Glossary is to ensure comparability and a common understanding of terms and concepts to make communication easier for policy-makers, legislators, practitioners, media and people interested in the topic of migration.

Take a look at the online video on the EMN Asylum and Migration Glossary - available in English with subtitles in a number of EU languages.

The app allows for convenient access to the terms translated into over 20 languages. Definitions can be browsed in English, Finnish, German, Greek, Italian and Latvian. It provides an alphabetical search, browse functions for the terms as well as a visual navigation of the relationships between terms.