Tools for following the trajectories of migrants

To follow the progress of migrants in the host society and to identify the spheres in which policy measures should be taken, we must increase the asylum and immigration longitudinal data. 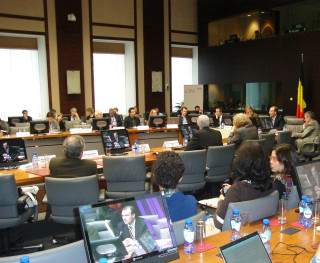 This is one of conclusions that the 150 participants drew at the conference on the “Long-term Follow-up of Migration Trajectories”, organised on 29 September by the Belgian National Contact Point of the European Migration Network (EMN).

On 29 September 2010, the Belgian National Contact Point of the European Migration Network (EMN) organised a conference under the auspices of the Belgian Presidency of the Council of the European Union, in order to exchange national experience and international initiatives on the long-term follow-up of migratory trajectories, that is, the development over time of the legal, social and political situation of migrants.

The Conference, which was held in the Palais d’Egmont, brought together around 150 participants. Representatives of the European Commission, of other European institutions (e.g. the European Economic and Social Committee) and international institutions (e.g. the Organisation for Economic Cooperation and Development, the International Labour Organisation, the Regional Initiative on Migration, Asylum and Refugees, etc.), the other National Contact Points of the EMN and their national networks, statistics and academic experts, exchanged information and methods, and tackled practical and technical questions related to the production of more comparable and consistent migratory data.

Conclusions on the following four major points were drawn from the Conference.

First, longitudinal data presents added value in addition to transversal data. Longitudinal studies will allow a better analysis of migratory trajectories and of the evolution over time of groups and individuals.

Mr Melchior Wathelet, Belgian Secretary of State for the Budget, Migration and Asylum Policy, Family Policy and Federal Cultural Institutions, gave the closing speech of the Conference, stressing in it the importance of longitudinal data in the evaluation and implementation of an integrated and long-term vision leading to more effective and fairer asylum, immigration and integration policies.

More information on this Conference, including the presentations and conclusions, can be obtained from the Belgian National Contact Point of the European Migration Network and at: http://emn.sarenet.es/