Today, Frontex published its Risk Analysis for 2018, which concentrates on the scope of Frontex operational activities and, in particular, on irregular migration at the external borders of the EU and Schengen Associated Countries. 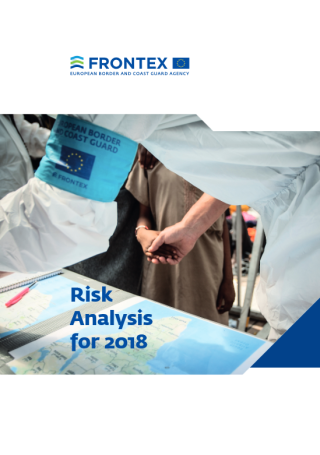 In 2017, the total number of illegal border-crossings into the EU dropped to its lowest in four years, especially due to a fall in detections on the Eastern Mediterranean and Western Balkan routes.

The annual total of 204 700 marked a significant decrease compared to recent years, but not yet a return to the situation before 2014, when figures ranged between 72 000 and 141 000 detections.

While the comparison on the annual basis shows that the Eastern Mediterranean and Western Balkan routes had the biggest decline in absolute numbers, the most significant development of last year was the sudden plunge in the number of illegal border crossings on the Central Mediterranean. The sudden reversal on this route took place in July.

In contrast with the three major migratory routes, the number of detections in the Western Mediterranean reached an unprecedented high, more than double the previous record from 2016.

Corresponding to the changes on the migratory routes, the relative share of African nationals increased compared with 2016, driven by fast-growing numbers of migrants from Maghreb countries (notably Morocco, Algeria and Tunisia) in the second half of the year. As a result, African nationals accounted for almost two-thirds of irregular migrants arriving at the shores of the EU.

For further information, see the full article on Frontex's website.