Today the Commission is reporting on progress in the fight against trafficking in human beings. The report presents trends, progress and challenges in this field. Efforts must be stepped up to effectively fight this phenomenon. 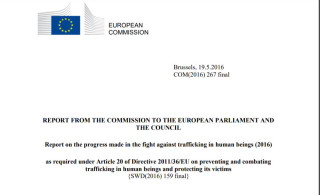 The report finds that in 2013-2014, there were 15.846 registered victims (both identified and presumed) of trafficking in the EU. Given the complexity of reporting on this phenomenon, the actual number of victims is likely to be substantially higher. In total 4.079 prosecutions and 3.129 convictions for trafficking were reported in the EU.

The report concludes inter alia that Member States should:

The findings of the report will feed into the development of a post-2016 strategy on trafficking in human beings to be published in 2016. For further information, please read the press release of the European Commission, which provides links towards a factsheet, the Commission report and the staff working document.