Today, March 12, 2018 the Law of 21 November 2017 (adopted in the Parliament on Nov. 9) modifying the Immigration Act was published in the Belgian Official Gazette and will come into force on March 22, 2018. 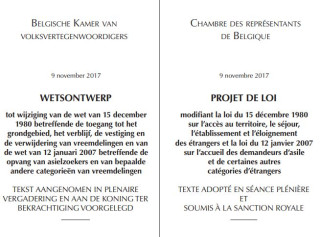 The changes introduced by the reform of the asylum law include - inter alia:

For further information, see the published texts (in French or in Dutch), as well as the presentation given by the Commissioner General on Refugees and Stateless Persons during the EMN Policy Event in December 2017 (available here).