Eurostat Newsrelease: Asylum in the EU Member States in 2016 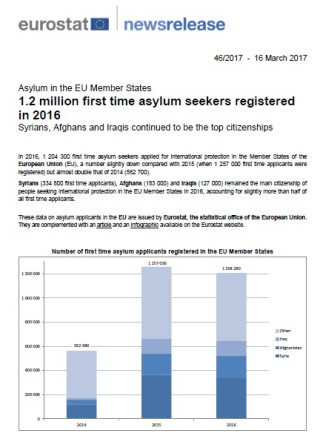 In 2016, the number of first time asylum applicants in the EU-28 from Syria fell back slightly to 335 thousand from 363 thousand in 2015; the share of Syrian citizens in the total dropped from 28.9 % to 27.8 %. Afghani citizens accounted for 15 % of the total number of first time asylum applicants and Iraqis for 11 %, while Pakistanis and Nigerians accounted for 4 % each.

Also the data on asylum decisions were updated:

For first instance decisions, some 54 % of all positive decisions in the EU-28 in 2016 resulted in grants of refugee status.

The Statistics Explained article analyses the trends both on First time asylum applicants and on first instance decisions on asylum applications for the entire year 2016. The article and the infographics can be found on the website of Eurostat via this link.

The News Release is available in English, French and German through the following link.