On 22 December 2017, Deputy Prime Minister Jan Jambon, in the name of the government, asked the Office of the Commissioner General for Refugees and Stateless Persons (CGRS) to carry out an independent inquiry regarding the risk in case of return to Sudan. The report was handed over to the government on 8 February 2018. 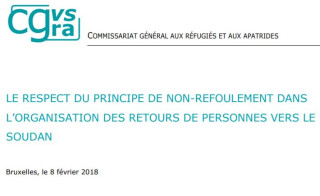 The CGRS concluded in its report that the risk upon return or removal to Sudan should be examined with utmost care, considering the problematic human rights situation in Sudan and the role of the security services in Sudan. It must be absolutely clear that persons who are eligible for a protection status (refugee status or subsidiary protection status) because of their individual situation (e.g. political opponents), cannot be sent back. Removal of these persons would clearly violate the non-refoulement principle. However, it is not the case that every person has a real risk in the sense of article 3 ECHR upon return to Sudan. This is confirmed by many experts and sources. This is also confirmed by the jurisprudence, including the jurisprudence of the European Court of Human Rights and the UK Upper Tribunal.

Furthermore the report concluded that it is not necessarily a problem that the identification procedure required for issuing a laissez-passer is carried out by means of an identification mission which may include members of the security services. However the CGRS recommends in its report to take a number of measures in the framework of an identification mission, such as the presence of the Belgian authorities and someone who understands the language of the interview. As regards the allegations of mistreatment reported by the Tahrir institute the CGRS concluded that it was not possible to obtain absolute certainty or clarity about whether the facts stated in the report of the Tahrir Institute actually took place. But regarding the three main testimonies from this report, it was found that some important elements were not true, to such an extent that this raises serious doubts about the rest of the testimony.

Most certainly for countries of origin, for which general information (COI) shows that the situation regarding the respect for human rights or security (e.g. as a result of an armed conflict) is particularly problematic. It seems difficult to uphold that the fact that a person has not applied for asylum, even though he put forward elements which may make him eligible for an international protection status, can be considered as a sufficient indication that there is no real risk regarding Article 3 ECHR. In such case, their obligation to cooperate requires from the authorities that they assess this risk more effectively “on the merits” whenever the elements put forward are “credible” and of such nature that they indicate a real risk regarding Article 3 ECHR. This assessment does not necessarily have to be conducted according to the rules laid down for the assessment of an application for international protection (asylum application), but it has to be carried out in accordance with the rules of good governance. And the result of the assessment must be put in a motivated decision, which implies the possibility to lodge an appeal. Furthermore, the CGRS opinion is that if there is found to be a real risk regarding article 3 ECHR is established, the person cannot be removed to his country of origin, but nevertheless a residence status does not necessarily have to be granted, especially when the person concerned refuses to apply for asylum. The CGRS is also of the opinion that the removal or return of persons to Sudan can be resumed provided that the protection need of each of the persons concerned has been assessed “on its merits” beforehand (including a protection need regarding article 3 ECHR).

In respons to these recommandations, Prime Minister, Charles Michel, pledged for the creation of a "commission removal".

The report can also be found on the website the CGRS via this link.